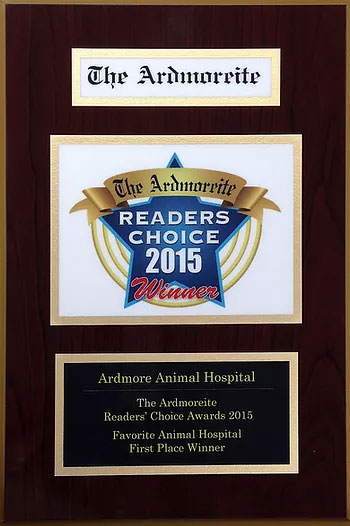 In the spring 2014 edition of OVMA Communique, in his article of the same title, we learn from John L. Myers, DVM, "Practice ownership and practice survival depend upon both clinical and economic expertise." Dr. Myers gives us a brief summary of the evolution of ownership of Ardmore Animal Hospital since its founding by Joseph Walker, a Texas A&M graduate, on April 1, 1947. Dr. Myers lauds "positive and beneficial associations" as keys to our clinic's longevity.

So, we have celebrated over 70 years in operation! And it is by the care and tenacity of those who've preceded that the foundation has been well laid, relationships nurtured, as now the practice is well poised to continue its unique capacity to endure. Perhaps it's no surprise that we were voted, again, to be the first place winner, as "Favorite Animal Hospital," in 2015, and 2019 Readers Choice Awards, of The Ardmoreite, our hometown newspaper.

During the first twenty five years of operation, Dr. Joseph Walker handed over the reins to Dr. James Vernon. In 1974 the practice was purchased by Dr. Bill Barrett, an Auburn University School of Veterinary Medicine graduate. Five years later in 1979, Dr. Lawrence McTague, a graduate of Oklahoma State University Veterinary School, joined Dr. Barrett as equal partner. Dr. McTague and Dr. Barrett built a new facility in which to finish out the twentieth century.

After 19 years as partners, Dr. McTague became sole owner of the practice in 1999. Under his caring and careful eye, by hiring full-time associates, also OSU graduates, Dr. Chris Williams and Dr. Tyla Yauk, and by also maintaining associations with Drs. Gary Woulfe, and Doug Nightingale, Dr. McTague and team have continued to serve the community from AAH's multi-animal practice for yet another 15+ years.

Dr. Chris & Jennifer Williams purchased Ardmore Animal Hospital, from Dr. McTague in August of 2015. This team, along with a loyal, hard-working, and caring staff, is looking forward to championing the legacy of steadfast clinical and economic expertise while seeking to provide the best environments and care possible to current and future generations of owners and the animals they love.

Find us on the map

We look forward to hearing from you